Precision Golf School runs junior golf camps through the summer months.  For the first year, Precision ran Facebook ads for golf camps to increase the number of campers in their Premier Golf Camps.  With about a $10 a day budget, Precision was able to see a 2000% ROI on their Facebook Ad campaign.

$25 off a Premier Golf Camp

Targeting the right audience is key to creating a high return on investment and keeping a good quality score on your ads.  See more about targeting audiences that have a high ROI here. 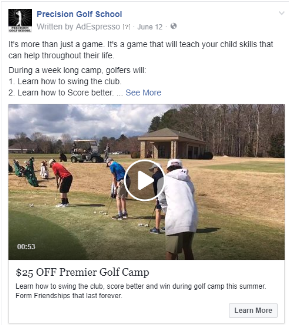 This campaign ran from June 12th through June 27th.  During that time, the promotion received 43 leads resulting in 21 camp purchases.  The average purchase was $200 resulting in $4200 in sales, an ROI of nearly 2000%.

The video ad campaign for Precision Golf School took play June 12-27 in order to acquire 5-6 new campers. They were offering a $25 off a premier golf camp. It was targeted toward current email subscribers and those who visited the golf page. The promotion received 43 leads resulting in 21 camp purchases. The average purchase was $200 resulting in $4200 in sales, in ROI of nearly 2000%.